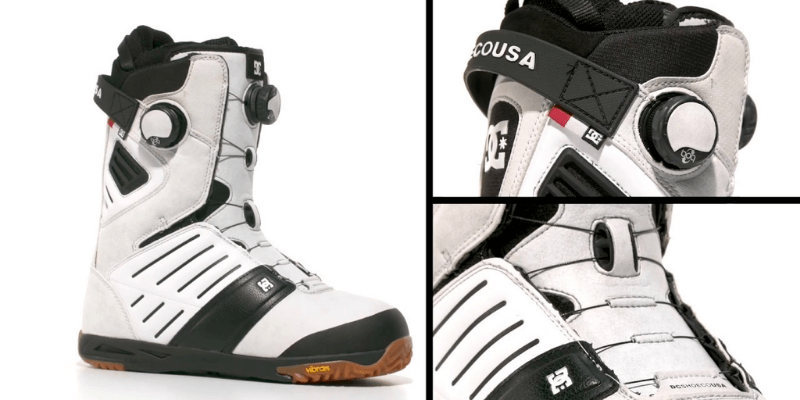 BOA snowboard boots feature a lace-free style of adjustment that uses a dial to help tighten and loosen the fit. This is a patented system for snowboard boots and other types of footwear and isn’t necessarily a style of boots.

I’m a passionate snowboarder who loves everything about the sport. I’ve worn many different types of snowboard boots over the years and have first-hand experience with BOA boots.

This post will show you what BOA snowboard boots are. I’ll explain how these boots work and why you might want them over other styles. I’ll also give you some pros and cons of using them.

So BOA boots can be any brand that features this patented lacing system.

But what is the BOA exactly?

BOA boots are characterized by using a dial to adjust the fit of the boots rather than traditional laces. This makes it really easy to get a good fit quickly, and it’s become a popular choice for many riders looking for convenience and performance.

BOA snowboard boots will have a circular dial (or two) located near the ankle area. To make adjustments, you simply twist the dial one way or another to loosen or tighten up the boots.

The dial is connected to cables inside the boot that tighten around your foot or loosen up. These types of boots won’t have regular boot laces at all, which can simplify the process of getting ready to ride.

BOA makes it really easy to adjust your boots to get a proper fit. You don’t need to mess with laces out in the snow, so you won’t have to take your gloves off when it’s time to get your boots on, off, or readjusted on the mountain.

BOA boots also have a more secure fit than traditional laces. They don’t really loosen up, which can be a problem with conventional laces. This helps keep your boots tight and ready for action and can be very useful in technical riding situations.

The most significant disadvantage of BOA snowboard boots is that they are more expensive than traditional laced boots.

BOA isn’t a great option if you are on a budget or are looking for a cheaper pair of boots. High-end BOA boots can cost you quite a bit, and you can still get high-quality boots for much cheaper without a BOA system.

Some riders also don’t like that the BOA dials stick out. They can catch on your pants or gaiters. This is a minor problem, but it’s still a preference for some people.

Here are some of the most commonly asked questions about BOA snowboard boots.

Is BOA good for snowboard boots?

BOA is a popular option for snowboard boots because it simplifies the lacing process and quickly helps you get a proper fit. This boot style also doesn’t loosen up as easily as traditional laces, so it can be a benefit in technical riding situations.

Is the BOA system worth it?

This depends on if you have the money to spend on BOA boots. They are typically more expensive than traditional laces, but you can see increased performance because your laces won’t loosen up easily. If you are on a budget, it might not be worth it.

What does BOA stand for?

BOA doesn’t really stand for anything. It’s a patented lacing style that the company (BOA) created. I’ve heard some people say that the name relates to Boa Constrictor snakes because the system tightens around your feet like these snakes do.

BOA systems can break, but it is pretty rare. I have yet to see any of my BOA boots break, but I have heard from friends who this has happened to. Your boots would probably need to be really old and worn out for the system to break.

BOA boots are cool, but I don’t think they are essential if you are trying to save some money. They can keep your feet locked in when riding technical terrain, but you can find cheaper boots if you go with traditional laces.