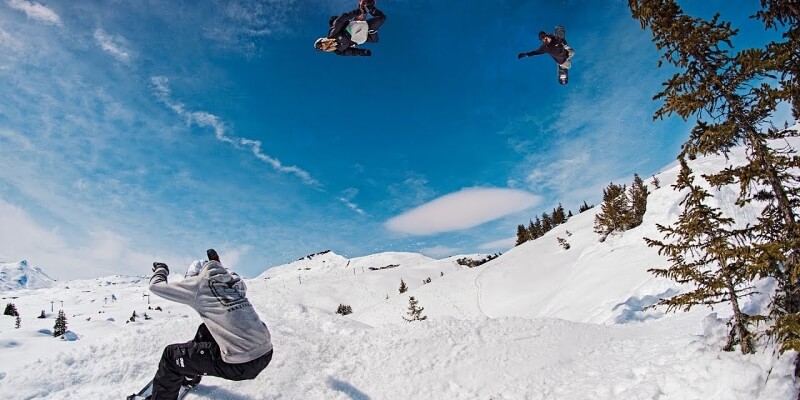 Snowboarding is an activity enjoyed by over 2 million Americans annually and millions more across the world.

The adrenaline and fun that it can provide are unmatched by almost any sport. Even though doing it every day isn’t possible, your love of snowboarding never needs to take a day off.

Those days where you can’t ride provide the perfect opportunity to watch a great snowboarding documentary or movie.

My name is Lorraine, and I’m a certified snowboard instructor. Let’s take a closer look at some of the best snowboarding documentaries and movies and for when you want to get your fix but can’t get on the mountain.

Truly one of the best snowboarding movies out there and will keep you on the edge of your seat for its duration.

The film stars Travis Rice, who is one of the most influential snowboarders of all time, and several other great boarders.

It shows brilliant trails and outrageous new tricks while the scenery and visuals make for some great viewing.

It is a stunning film that showcases the challenges and adversity that can often face riders on the hills. From the cinematography to the riding and even the music, this film absolutely knocks it out of the park.

If you are a snowboarding fan (and even if you’re not) do yourself a favor and check this out.

The Crash Reel is a documentary that documents the life of snowboarder Kevin Pearce and his rivalry with Shaun White.

Unfortunately, as he was preparing for the 2010 Winter Olympics, Pearce suffered a traumatic brain injury that would end his professional snowboarding career.

This film is all about determination and bouncing back from struggles, and is full of action, emotion, and passion.

The film is a truly honest and inside look into the world of snowboarding, that shows the good, the bad, and the ugly of the sport.

While it focuses on Kevin’s recovery from his injury, the film is just as much about strong family bonds and the importance of not giving up.

Craig Kelly is often considered the “Godfather of freeriding” and is a legend in the world of snowboarding.

However, before he became a legend, Kelly shocked the world right at the height of snowboarding’s popularity.

He had millions of dollars in sponsorships and prizes up for grabs, but instead decided to focus on freeriding, which was quite uncommon at the time.

This film is all about his life, his incredible passion for freeriding in the mountains, and his unfortunate death in 2003 in an avalanche.

It is incredibly captivating and shows over 15 years’ worth of footage from all over the world. If you haven’t learned about the story of the life of Craig Kelly yet, this is a perfect way to do it.

You can watch the full film here.

Snowboarding amongst women has been growing steadily for years and this film likely has a lot to do with it.

It showcases some of the incredible women snowboarders making an impact in the sport today. It also pays tribute to the history of women’s snowboarding and recognizes those who have been so influential in the growth of the sport.

This is an inspiring film that took over two years to complete. It includes riding from some of the best on the planet including Leanne Pelosi, Hana Beaman, Marie-France Roy, and several others.

The backcountry terrain that is ridden by the crew is incredibly gorgeous and picturesque, as well.

While this movie is quite short, it packs a punch. Created by the Nitro snowboarding team, this film brings together some of the best snowboarders on the planet and sends them out on a snowboarding getaway.

The tricks and moves that these athletes are able to pull off are mind-blowing and will have your jaw hitting the floor.

The film also shows the joy and passion that the boarders have, and the friendship they share.

In addition to snowboarding, this movie showcases how much fun these top-level athletes have filming and traveling with one another. It is a feel-good movie, with no shortage of action to keep you interested.

Any of these snowboarding films are a great way to spend a day inside when you can’t hit the hills. Whether you want to laugh, cry, or simply see some incredible tricks and views, these movies can surely help you out.