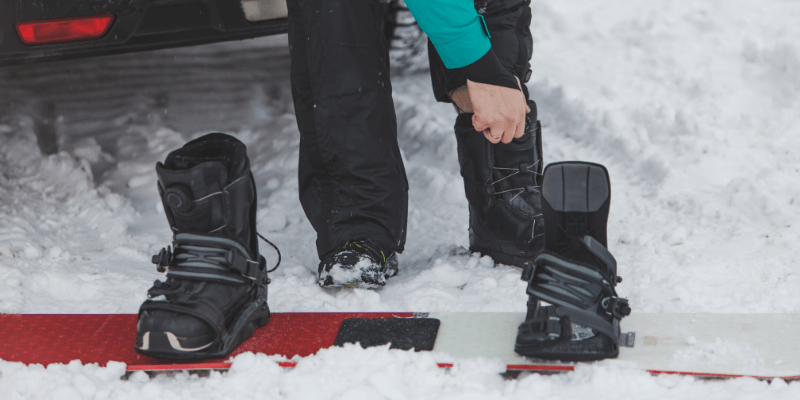 Getting a new pair of snowboard boots is always exciting. But sometimes, you need to break them in before they feel good on your feet. Some boots don’t need much of a break in, but others will take a minute to loosen up.

I’ve been snowboarding for most of my life, and I’ve broken in numerous pairs of boots over the years. I know how to make this happen easily so you can start enjoying your time in the snow.

This post will show you how to break in snowboard boots. I’ll give you some tips and tricks to speed up the process and tell you the importance of breaking in your boots. It’s not complicated, but it is good information to know.

Not all snowboard boots need to be broken in. Some models these days are designed to give you a broken-in-like feel right out of the box. I still think that most boots require at least a bit of a break in period to get perfect.

During the break in process, it’s also important to note that your feet also need to get used to your boots. It can take a few days of riding for you to feel really comfortable in new boots, even if they are somewhat broken in.

How to Break in Snowboard Boots

Here are the two primary ways to break in snowboard boots. I think the best way is to get out on the snow and ride with them, but the other option is a more gentle approach.

Put Your Boots on and Go Ride

The best way to break in your snowboard boots is to simply start using them. If you put your boots on and go out and ride, you will naturally break them in along the way. You don’t need to do anything different. You just need to use them.

Now, the break in process isn’t necessarily going to be comfortable. Your boots might not feel great on the first few days of riding. But the more you use them, the quicker they will break in and start to feel great.

You can always take it easy for a day or two if your feet start to hurt while breaking them in. This can be a little frustrating, but if you have a pair of really stiff boots, it might take a while to break them in.

Wear the Boots Around the House

Another approach you can take is to wear your boots around your house before using them on the mountain. This allows you to be more gentle with your feet, and you can avoid the pain and discomfort involved with the process.

The downside is that this method takes quite a bit longer than wearing your boots in the snow. You really aren’t going to break them in properly until you get on the snow. But wearing them around the house is an effective start.

How Do You Break In Snowboard Boots Fast?

The fastest way to break in snowboard boots is to snowboard in them. If you put them on and hit the slopes, you will break them in much quicker than wearing them around the house. It’s the most effective way to go about it.

How Long Does it Take to Break In Snowboard Boots?

Most snowboard boots should break-in in about 3-5 full days of riding. Every boot is slightly different, so this depends on the model and how your feet handle it. If you wear them around the house, it will take a lot longer.

How Should New Snowboard Boots Feel?

New snowboard boots should feel firm and comfortable. They should be a little tight and might even feel a little too small. But once you break them in, they will pack out and loosen up a bit to give you a perfect fit.

Breaking in snowboard boots isn’t that complicated, and all you really need to do is wear them on the mountain or at your house. Remember that it can take a few full days of riding to feel really comfortable in your boots.