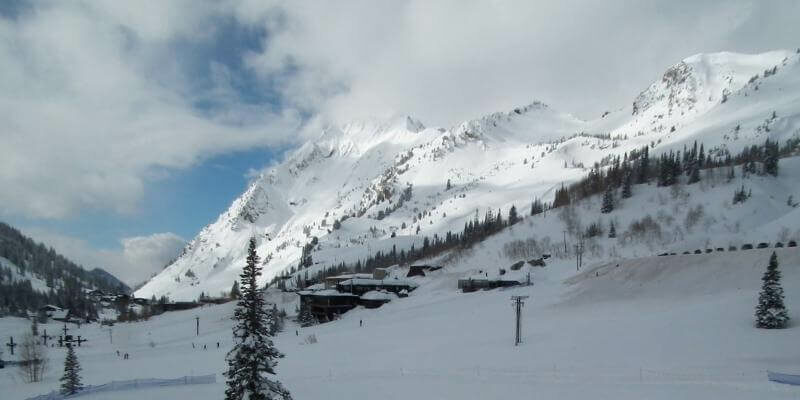 Alta is a skiing-only mountain, which means you can’t snowboard here. It’s one of the only few resorts left in the U.S. that still doesn’t allow snowboarders on the slopes. This is pretty weird but might never change.

I’ve been snowboarding for most of my life and have been lucky to visit many excellent resorts around the world. But I’ve obviously never ridden at Alta because they don’t allow snowboarders.

In this post, I’ll explore why you can’t snowboard at Alta and give you some other information about the resort.

Today, you can’t snowboard at Alta. The resort has a skier’s only policy, and snowboarding is prohibited. It’s a great mountain that offers excellent snow and good terrain, but you’ll need skis if you want to explore it all.

But the no-snowboarding policy hasn’t always been the case. When the resort was first opened, it actually did allow snowboarders. The ban was created in 1981 and has pretty much been in place ever since.

During the early years of the snowboarding ban, a loophole still allowed you to snowboard down. You had to put short skis on your feet and then switch to your snowboard when you got up to the top.

This loophole only lasted a few years, and then Alta banned snowboarding altogether. From the mid-1980s into today, skiers have been the only ones who could enjoy all of the fresh snow and fun terrain here.

Why You Can’t Snowboard at Alta

There is no exact reason you can’t snowboard at Alta other than this is the rule that the resort enforces. It’s pretty silly and is biased towards snowboarders, but just the way it is.

I guess it dates back to the early feuds between skiers and snowboarders.

Alta is one of only three resorts in the U.S. that doesn’t allow snowboarding. It’s an outdated rule that is much more of an exception than the norm, but it’s still in place. If you want to snowboard, there are plenty of other places to do it.

I don’t know if the no snowboarding rule at Alta will ever change. If they have kept it up this far, it seems like it’s here to stay. But I’m not giving up hope. If enough snowboarders push for riding here, maybe it can still happen.

Where You Can Snowboard Near Alta

Luckily, Alta is not the only resort in the area. There are several incredible snowboarding locations within about an hour’s drive from the Salt Lake City area. And many of them have just as good of snow and terrain as Alta.

Snowbird is one resort that is close to Alta and does allow snowboarding. If you want to experience similar snow and terrain on your board, Snowbird is a good option. It’s a world-class resort with all the amenities you’d imagine.

Park City is another resort in the area that is worth exploring. This one is huge and offers a bunch of different terrain to explore. It’s one of the top resorts in the world, and you’ll be able to experience all that Utah has to offer by riding here.

Here are some of the most commonly asked questions about snowboarding at Alta.

Why is snowboarding not allowed at Alta?

There really isn’t a good answer to this question other than that’s just the way it is. Alta currently does not allow snowboarding, and the resort might never change that policy. It’s outdated and annoying, but that’s how it is.

During the COVID-19 pandemic, some snowboarders did hike Alta. There was no resort staff working on the mountain during this time, and anyone was free to hike up the slopes and ride or ski back down.

If you want to snowboard near Alta, there are plenty of other options. The region is home to a number of resorts that do allow snowboarding, so don’t let the weird skiing-only rule of Alta get you down too much!