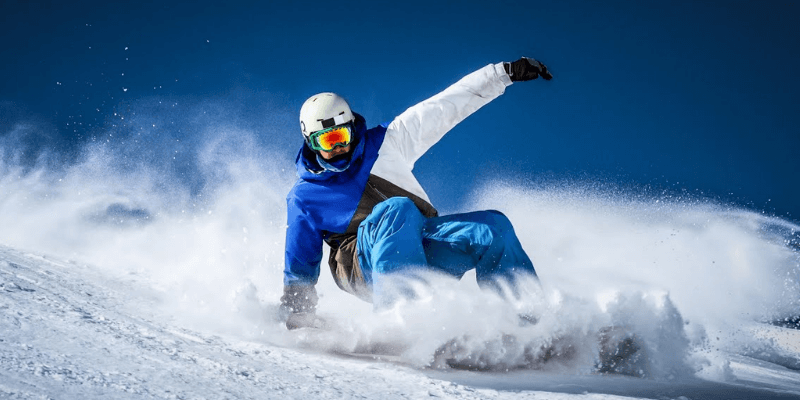 Unfortunately, you can’t snowboard at Deer Valley. This is one of only a handful of resorts that still does not allow snowboarders on the slopes. Most riders think it’s pretty silly, but it’s probably not going to change soon.

I’m an avid snowboarder who has been bouncing around the mountains for decades. I’ve been to many different resorts over the years, and I’ve researched several locations that only allow skiers.

I’ll explain why you can’t snowboard at Deer Valley in this post. I’ll explore this rule and provide some advice on where to find great snow in the area, even if it’s not at this particular resort.

It may seem pretty crazy, but a handful of resorts still don’t allow snowboarding. Deer Valley in Utah is one of these. Even if you really want to or are rich and famous, you aren’t going to be able to snowboard here.

Deer Valley is a skiing-only mountain. That means you can go down any slope you want if you have skis attached to your feet but won’t be allowed on the lifts if you have a snowboard on.

The resort has been strict about this rule for a while, and it doesn’t look like things will change. It’s frustrating for any snowboarder who wants to ride here, but it’s just how it is.

Each resort has its own set of rules, but this one just seems silly to me. I mean, come on, right?! Luckily, there aren’t many resorts that have a similar policy, and you can snowboard at like 99% of places around the world.

Why Can’t You Snowboard at Deer Valley?

Deer Valley doesn’t provide any real information on the question portion of its website relating to why you can’t snowboard there. It simply states that Deer Valley is a ski-only resort.

So why can’t you snowboard at Deer Valley?

I think it dates back to decades ago hate that some skiers had for snowboarders when the sport was just getting popular. Some skiers saw snowboarding as a fad or activity that wasn’t viable, and there was a push to keep snowboarders off the slopes.

While that hate didn’t last in many other places, a few resorts like Deer Valley haven’t changed their outdated rules. I think it’s a shame, and I know a ton of riders who have called and complained to Deer Valley customer service.

Other resorts once banned snowboarding but changed the rules. This makes more sense. In the early days of snowboarding, it wasn’t as popular, so resorts didn’t allow boards on the slopes.

But as the sport took off, the resorts changed their ways and dropped the no snowboarders rules. At nearly any location you can ski today, you can also snowboard. But Deer Valley is a glaring exception to this rule.

Since Deer Valley has held out this long as a skiers-only mountain, I don’t think the rule is going to change any time soon. While I hope the resort opens its slopes to everyone at some point, it’s probably not going to happen at this point.

Here are some frequently asked questions relating to snowboarding at Deer Valley.

Which ski resorts in Utah do not allow snowboarding?

There are only two resorts in Utah that currently do not allow snowboarding. Those are Deer Valley and Alta. While this is pretty unfortunate, it’s the way it’s always been, and the snowboarding ban might be around for a while.

Are snowboards allowed at Park City?

Park City resort allows snowboards, so you can still experience awesome Utah powder even if you can’t go to Deer Valley. The area is well known for having some great terrain, and Park City is a fun resort to ride.

I know I’m not alone in thinking that Deer Valley is crazy not to allow snowboarders. But that’s how the resort always has been, and things might end up always being that way. It’s frustrating, but there’s not much we riders can do about it.

Thankfully, there are other resorts in Utah (and everywhere else in the world) that do allow snowboarders. It’s funny to think that snowboarding bans actually exist, but Deer Valley is living proof.