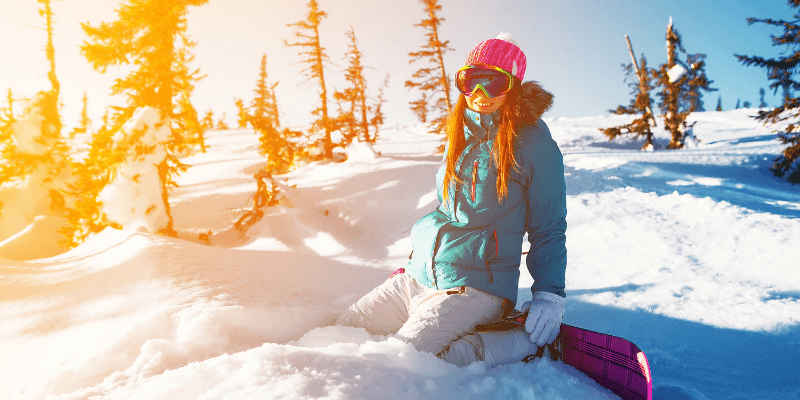 Pregnancy and action sports don’t often go together. While it’s technically possible to ride a snowboard when you are pregnant, it isn’t recommended. There are inherent risks that make it something you should probably avoid for nine months.

I’m a certified snowboarding instructor, and I’ve been riding most of my life. I’ve never snowboarded pregnant because I’ve never been pregnant. But I have a few friends who have and use some of their experience here.

In this post, I’ll look at snowboarding while pregnant and show you the risks and dangers that might prevent you from flying down a mountain while a baby is growing inside of you.

Let’s get the diapers out and get started.

Quick Answer: Can You Snowboard While Pregnant?

The quick answer to this is that while you can feasibly go snowboarding while pregnant, the risk of falling should be enough to keep you from doing so.

Most medical professionals will tell you not to ride at all while pregnant, while some snowboard enthusiasts will tell you that it’s ok only in the first trimester, which works out to the first 12 weeks of pregnancy.

The Risks of Snowboarding While Pregnant

Snowboarding can be a dangerous sport for anyone. Even if you are very experienced, you still risk taking a terrible fall that could result in severe injury. With more and more people riding, sometimes accidents happen that aren’t even your fault.

If you snowboard when you are pregnant, these risks extend to the unborn child inside of you. If you take a bad fall and directly hit your abdomen on the snow, a tree, or another rider, the pregnancy can be jeopardized.

Nearly all medical advice states that contact sports and activities with a potential risk of impact or bouncy movements should be avoided when pregnant. Snowboarding obviously falls into this category.

You can also be at greater risk of injury by riding when you are pregnant. Carrying extra pounds can put more wear and tear on your body, and you might not have the usual amount of balance and coordination you would otherwise.

Falling is a bigger risk for the baby and the body. Even a mild fall where you hit your stomach can have adverse effects. If you have ever wiped out hard on a snowboard, you know how much impact can occur.

Is It Ever Safe to Snowboard While Pregnant?

If you are going to take the risk and snowboard while pregnant, it is safer to do it during the earlier stages of the pregnancy. Before the baby is more developed, there is less risk of severe injury caused by impact.

The advice I have heard from other female riders who have ridden pregnant is that the safest time to ride is during the first month of pregnancy. This risk goes up after that, but it can still be relatively safe during the first trimester, up to 12 weeks.

After the first trimester, you really shouldn’t consider riding at all. During this time, the baby is growing rapidly, and your body is changing quickly to accommodate. Your skills on a board will most likely be affected, and the risks increase pretty substantially.

If you really want to play it safe, you shouldn’t snowboard at all when you are pregnant. If you choose to get on a board, make sure you only do it during the first trimester of pregnancy.

Your Skill Level and Your Risk Factor

You might be thinking that because you are a skilled snowboarder, your risks for snowboarding while pregnant are lowered. While this may be true to some extent, the truth is there are too many things out of your control for this to be a deciding factor.

If you are an experienced rider, I think going out onto the mountain during your first trimester is a limited risk. You have enough skill to ride safely and keep out of harm’s way as best you can. You know how to ride within your limits, or should, anyway.

If you are a beginner who doesn’t have that many seasons under your belt, I would recommend avoiding the mountain while pregnant altogether. It’s just not worth the risk. If you aren’t confident on a board, there’s no way to be confident you won’t fall.

Related Reading: How to Check Your Snowboarding Level

The main reason why I don’t think it’s worth the risk to snowboard at all while pregnant is that you can’t always control other riders. I’ve seen too many people get hurt because other riders smashed into them when riding out of control.

Even if you are very skilled, aware, and wear a helmet, there is still a chance that another person can cause you severe injury that is no fault of your own. With that in mind, I just don’t think it’s worth risking riding while pregnant.

At the end of the day, it’s up to you whether you want to snowboard while you are pregnant. No laws are telling you not to do it. But using a little common sense is often the best solution, so make your decision wisely.

Here are a few quick answers to some common questions regarding snowboarding while pregnant.

What activities should be avoided during pregnancy?

Most activities that involve a lot of sudden movement, risk of trauma, or violent contact to the body should be avoided during pregnancy. This includes skiing, snowboarding, horseback riding, bike riding, hockey, and basketball, to name a few.

How late into pregnancy can you ski?

If you take the risk and decide to ski or snowboard when you are pregnant, it’s really only somewhat safe to do so for the first trimester. Other advice states that you should avoid skiing after the first month when the baby starts to develop.

Should you snow ski while pregnant?

Skiing involves nearly all of the same risks as snowboarding and should generally be avoided while pregnant. If you choose to ski while you are pregnant, it’s only safe to do it early on in the pregnancy.

If you are an avid snowboarder, it might be challenging to take a season off the snow, even if you get pregnant. But for the safety of the child and yourself, it’s probably a better idea to wait until the little one can strap into their own board before taking them onto the snow.

Snowboarding has inherent risks that make it a potentially dangerous sport for anyone. The main risk is that you might take a fall and directly hit your stomach area, which could be very bad when you are pregnant.

Always better to be safe than sorry!