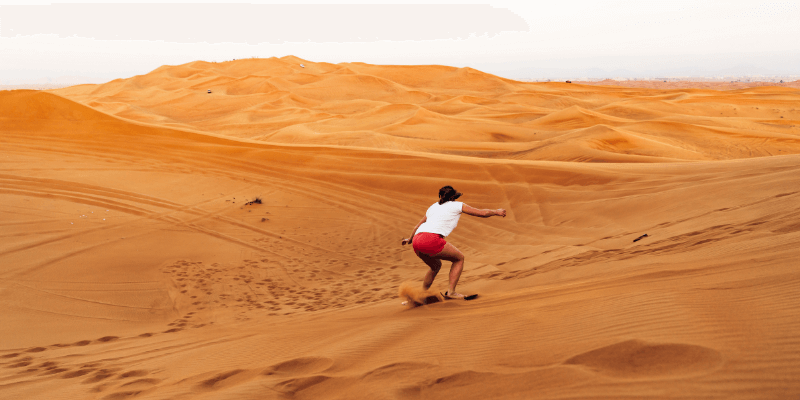 It is possible to use a snowboard on sand, and this is called sandboarding. It’s a fun way to get some turns in when there isn’t snow on the ground. But you should use an older board that you don’t care about because the sand can damage your equipment.

I’ve been snowboarding for most of my life, and I love everything about the sport. I’ve also tried sandboarding a few times and know how fun it can be.

In this post, I’ll explain what sandboarding is and tell you where you might be able to catch some summertime turns when there is no snow on the ground.

Sandboarding is pretty much the same as snowboarding, except, you guessed it, you ride down the sand instead of the snow. You can take a regular snowboard on a slope of sand and ride down it just like you would at the resort.

If you’ve never tried sandboarding, it’s a lot of fun and a great way to keep your stoke alive when there is no snow around. You don’t need any special equipment to go sandboarding, and if you can snowboard, you’ll be able to take those skills to the sand with no problem.

You still need to wear snowboarding boots and strap into bindings when sandboarding if you want to have the best control. But there are also some minimal sandboards that allow you to simply step into straps without having real bindings.

If you have an old snowboard that you don’t care much about, you can convert it into a sandboard without doing anything. Just know that you will wear off the wax and damage the board a bit.

I don’t recommend using your regular snowboard in the sand. Sand is rougher than snow and ice and can get into the moving parts of your bindings. That’s why using an older board that you might have lying around is ideal.

Where to Ride a Snowboard on the Sand

There are a number of different locations you can ride your snowboard on the sand. The only things you really need are a somewhat steep slope of sand and your board, bindings, and boots.

If there are sand dunes anywhere near you, they make for the ideal place to sandboard. Dunes are basically mountains of sand that you can hike up and then ride down. Don’t expect to get on any chairlifts when sandboarding.

Some beaches or coastal locations also have enough sand to go sandboarding. If you see a slope that’s a hundred yards or more long, you should get a few quick turns on it.

I recommend wearing goggles when you go sandboarding. The sand and sun will get in your eyes, so wearing eye protection is a must. But again, you’ll want to use older goggles that you don’t care about because the sand can damage them quickly.

Below are a few quick answers to some of the most commonly asked questions about snowboarding on the sand.

What is snowboarding on sand called?

Snowboarding on sand is usually called sandboarding. Some people also call it sand riding. It’s very similar to regular snowboarding in terms of the balance and skills required. But you obviously don’t need to wear winter clothing.

Where can you snowboard in sand?

There are many locations all over the world where you can snowboard on sand. I first did this at Great Sand Dunes National Park in Colorado. But basically, anywhere that has a long slope of sand, like a beach or desert, will give you the opportunity to sandboard.

Is sand boarding easier than snowboarding?

Sandboarding and snowboarding are very similar. I wouldn’t say that one is easier than the other because they both require the same skills and balance. If you don’t like being out in the cold, sandboarding might be more approachable.

It is possible to ride a snowboard in the sand. You don’t need any special skills or equipment to do this, but you’ll want to use an older board because it can get damaged by the harsh conditions involved with sandboarding.