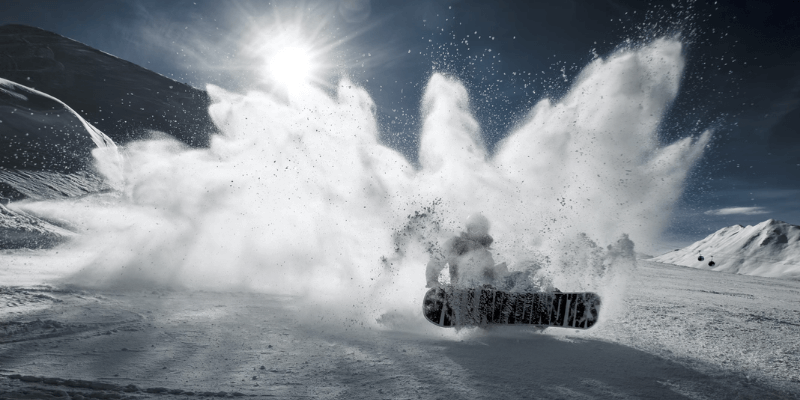 I’m an avid snowboarder who loves everything about the sport. One reason I enjoy snowboarding so much is because of how fast you can go. So I did some research into how fast snowboarders go.

This post will tell you the speed of the average snowboarder and the fastest anyone has ever gone on a board. I’ll also tell you a few factors that can affect speed and why you always need to be safe when going fast.

Time to let it rip.

The average snowboarder at the resort will ride at speeds between 20mph to 40mph. And 40mph is actually pretty fast. Beginners who are just learning will probably want to stay at 20mph or below.

More advanced riders can push top speeds and reach 40mph or higher. But at the resort, you aren’t always trying to reach top speed. That’s why I give you an average range here for what most riders can expect as they zip down the slopes.

The fastest snowboard speed ever recorded so far to date was 131.11 mph (211 km/h). Jamie Barrow set this world record. But this attempt involved him being towed behind a fast-moving car on the snow, so it’s not a traditional record achieved during regular snowboarding.

The fastest speeds typically reached going downhill on a snowboard are around 95 mph. That is really fast! Highly experienced riders can only achieve these types of speeds under perfect conditions.

If you are a pretty good snowboarder and curious about your top speed on the mountain, some resorts have racecourses with speedometers that can clock your speed. It’s fun to see how fast you can go in a safe environment.

Reaching 60 mph is probably the top speed for the everyday resort rider. Going much faster than this is pretty scary, and you can easily hurt yourself or other riders if you try to go as fast as possible.

A lot of snowboarders love going fast, and I do too!

There is nothing quite like bombing down fresh corduroy or a steep resort run as fast as possible. If you are a speed demon, you know exactly what I’m talking about.

But going fast comes with increased risks, and you always want to be safe if you are trying to push your limits.

Always wear a helmet and make sure that you only go straight line and attempt high speeds when there aren’t a lot of other riders in the way.

It’s really easy to lose control when you are going fast. Turning and slowing down becomes more difficult, and one wrong move and send you into a nasty wipeout.

Here are a few quick answers to some of the most commonly asked questions about how fast snowboarders go.

Is 50 mph fast on a snowboard?

50 mph is pretty fast on a snowboard. If you are an experienced rider, you can probably reach this speed and stay in control. But 50 mph is way out of range for anyone who is just beginning and shouldn’t even be attempted.

How fast do Olympic snowboarders go?

This depends on the event, but some speed events like snowboard cross can have riders reach speeds of 60 mph or more. You might even see a little faster giant slalom. But trick-based events are not based on speed.

What is the fastest snowboard?

Typically, longer boards will allow you to go faster. But there really isn’t one single brand or model that is the fastest board out there. It’s more about the rider’s ability than what board they use to reach top speeds.

Speed is part of the appeal of snowboarding, and no matter how experienced you are, going fast is a rush. While the fastest speeds on a board are unattainable by most of us, bombing it downhill (safely) will never get old!