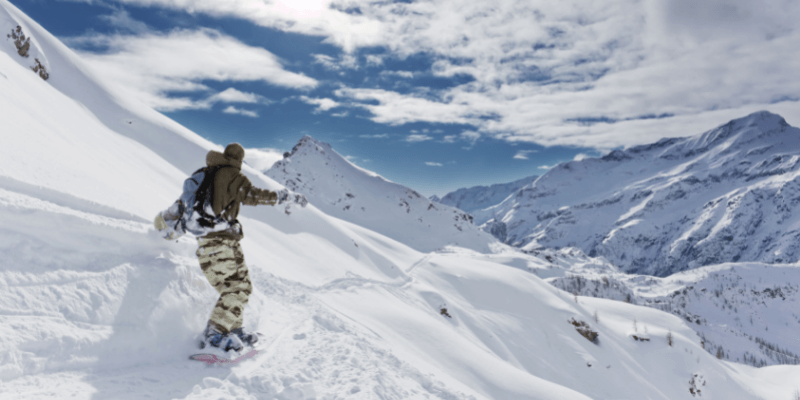 If you are a fan of winter sports, you have probably wondered which is the easiest. While I generally think that snowboarding is easier to learn than skiing, this isn’t the case for everyone.

I’ve been snowboarding for most of my life, and I’m currently a certified instructor. I’ve also learned how to ski, and I have experience with both sports.

In this post, I’ll examine some of the considerations to keep in mind when thinking about whether skiing or snowboarding is easier.

Let’s get on the snow and get to it.

There is no exact answer to the question of whether skiing or snowboarding is easier. It can be very different for every individual, and just because you find one of these sports easier to learn doesn’t mean that your friend will feel the same way.

Some people are just naturally more inclined to one over the other. That doesn’t mean that one is always easier to learn. It just means that a certain person was able to learn a particular snow sport more quickly.

I’ll list some things in the following sections that show how and when skiing or snowboarding can be easier to learn. You might want to experiment with both to get a feel for which sport is more accessible for you.

In my experience, snowboarding is easier than skiing to learn. This is a somewhat broad generalization, but if you take someone who has never been on the snow before, they will usually pick up the basics of snowboarding faster than the basics of skiing.

As a snowboarding instructor, I’ve worked with many different people on their first day of snowboarding. I’ve also seen some of these people take a skiing lesson the following day, just to see which sport they like the best.

I’d say about seven times out of ten newcomers can learn how to snowboard (at least at a fundamental level) easier than they can learn how to ski. Again, it all depends on the person, and every individual is different.

Why Snowboarding is Easier

Snowboarding is usually easier to learn for anyone with experience in another board sport such as skateboarding or surfing. While those other board sports don’t involve using your edges, they have similar attributes that can directly apply.

First of all, all of the board sports have a similar positioning and balance. You stand up on the board with either your right or left foot forward. You lean heelside and toeside to turn. They all have the same basic feel to them.

When I teach someone how to snowboard, I always ask if they have ever been on a skateboard or surfboard. This will get us started with the basic technique, and they will typically already know which leg is their dominant to lead with, which is a great starting point.

I also think that snowboarding is usually easier than skiing if you have never been in the snow at all before. There isn’t as much equipment to worry about, and the snowboard boots and bindings feel more natural than ski boots and bindings.

You don’t have to worry about using poles or your legs going in opposite directions. Snowboarding involves using your body and board as a single unit. This can be much more simple for anyone new to the sport.

I’ll be honest and say that I might be biased because I snowboard more than I ski. I also learned how to snowboard first, so I think it is easier. You might have a completely different experience, even if you already know how to ride a skateboard or surfboard.

Why Skiing is Easier

There are plenty of people out there who find skiing to be easier than snowboarding. I can’t argue with this, and as I said earlier in this post, things will be different for everybody.

Skiing involves pointing both of your feet and your body straight downhill. This can be more intuitive because you use a stance similar to how you walk or run when skiing. You don’t have to turn your body sideways like you do when you are riding.

If you don’t have any experience with board sports, there is a good chance that you’ll pick up skiing easier than snowboarding. This is again due to the more intuitive nature of the sport and the forward-facing orientation.

If you have experience ice-skating, you’ll probably be able to learn skiing pretty easily. Both of these activities involve a lot of the same balance and coordination. You use your legs at the same time and individually to turn, slow down, and perform other maneuvers.

Learning the basics of skiing can be easier for many people, but reaching an advanced-level skillset can take more time on skis than it can on a snowboard. I don’t know why this is the case, but I’ve seen it happen multiple times over the years.

Skiing seems somewhat more intuitive for people to figure out than snowboarding, especially if they have never attempted any snowsport before. Again, this is a broad generalization, but my experience has proven it to be true.

The Importance of Instruction

No matter which winter sport you find to be more accessible, the best way to get through the difficult learning stages is to have someone alongside teaching you the ropes. This can be an instructor or a friend and can go a long way towards improving your skills quickly.

If you have never attempted snowboarding or skiing before, I would highly suggest taking a lesson with a good instructor. Even if I weren’t an instructor myself, I would still make this recommendation.

Instructors have a lot of experience working with newbies and know how to help you learn much more quickly than you would attempting anything on your own. It can be frustrating when you don’t know what you are doing, and instructors can help you push through barriers.

If you are already somewhat experienced and don’t want to take a lesson, skiing or riding with friends who are better than you can be an excellent way to become better.

By challenging yourself and getting outside of your comfort zone, you’ll be put into situations that will help you improve. It only takes a little encouragement to build up the courage to try something new.

Having a friend who is willing to ride with you even if you are not as good as them on the snow is extremely valuable. You never want to put yourself in a dangerous situation, but getting the proper support to try something new is amazing.

Another thing to keep in mind is that practice makes perfect. Learning anything new can be frustrating and take time. The more effort you put into skiing or snowboarding, the better you will be.

The exciting thing about learning is that you will make progress quickly. And once you get hooked on a winter sport, there’s no going back!

Here are a few quick answers to some common questions relating to learning skiing and snowboarding.

Is it better to learn to ski or snowboard first?

I don’t think that there is a clear answer to this question, and it depends on multiple factors. If you have experience with other board sports, snowboarding will probably be easy. If you have no experience in the snow at all, skiing can sometimes be easier.

Is it more dangerous to ski or snowboard?

Both skiing and snowboarding come with inherent risks that make them potentially dangerous. I’d say that they have the same amount of risk, which makes them equally dangerous. You can reduce these dangers by wearing a helmet and skiing or riding in control at all times.

Would I be better at skiing or snowboarding?

Snowboarding and skiing are amazing sports. But even though they both involve sliding downhill across the snow at high speeds, they are subtle differences that can make one easier than the other.

Not everyone will find snowboarding easier than skiing and vice versa. It depends on your previous experience, natural abilities, and a few other factors. You might want to try both to get a feel for which is easier.

Regardless of which you find easier, remember that the key to improving is to get out there on the snow and put in the effort!