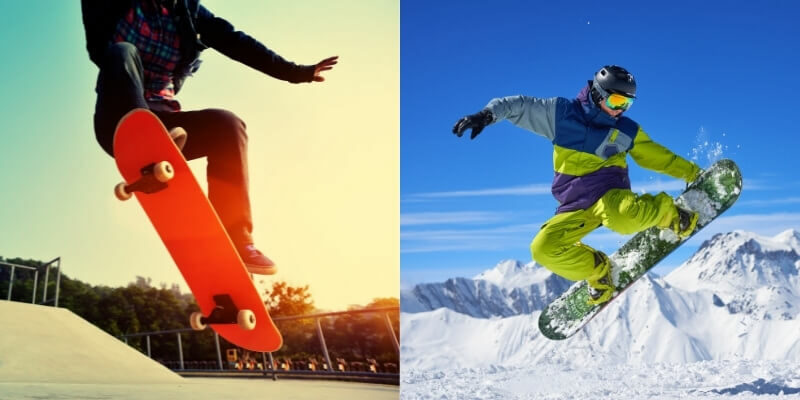 A common question that many people have is whether snowboarding is like skateboarding. They are both board sports, so they should share some similarities, right? It’s worth taking a look at in a bit more depth than that.

I’m a lifelong snowboarder who also happens to skate during the warmer months of the year. I have firsthand experience with the similarities and differences between these two activities.

In this article, I’ll explore some of the main ways snowboarding is like skateboarding while also highlighting how they are different. You can use the information to gauge what might be involved in learning one, or both, of these sports.

Hop on your board, and let’s get rolling.

Similarities Between Snowboarding and Skateboarding

There are plenty of similarities between snowboarding and skateboarding. Many athletes and casual enthusiasts do both of these sports. They are both enjoyable, and I highly suggest trying them both out if you haven’t yet.

They are both board sports

This seems like an obvious comparison (and it is), but it’s still worth pointing out because it means that similar skills and techniques are involved in both activities. The basic balance and coordination needed for snowboarding come into play when you are skateboarding.

You stand up on a board and move forward on it with both of the sports as well. This means that you’ll have your same foot forward on a skateboard and a snowboard. It can be very intuitive to go from one board sport to another because of this.

Both skateboarding and snowboarding have similar methods of balance. You lean into your turns either towards your toes or towards your heels. There are differences in these turns, and we will look at that below, but the basic turning coordination is very similar.

Skateboarding has been around longer than snowboarding. But snowboarding came to be because of skateboarding. The sports are closely related and have a similar intention – to move freely on a board.

Many snowboarding tricks and maneuvers came from the world of skateboarding. An ollie is a fundamental trick on a skateboard and snowboard. There are plenty of other movements that exist in both sports as well.

At this point, both sports also influence one another. Some of the best snowboarders in the world are great skateboarders, and it goes the other way around. They coexist in the same extreme/alternative sports world and push the limits of each endeavor.

Another key similarity between snowboarding and skateboarding is that they are just flat-out fun to do. If you have a love for one of these sports, there’s a very good chance you are going to love the other one.

If you have never been on a board before (no matter what kind), it’s hard to describe the feeling exactly. It’s pure freedom and excitement, to put things mildly. The fun and stoke you get as you move forward or jump into the air are unreal.

A fun way to exercise

Both sports are always a great way to get some exercise. If you don’t like traditional forms of exercise, snowboarding and skateboarding give you a fun and unique way to get the body moving.

Of course, you’ll experience different levels of exercise depending on how hard you ride and your ability level. But both of these sports take effort, and your body and mind will thank you for doing them.

Differences Between Snowboarding and Skateboarding

There are also a handful of differences between snowboarding and skateboarding. From where you do each sport to the technique involved, they are far from precisely the same.

Snowboarding requires snow. Skateboarding does not. I know plenty of snowboarders who skate a lot during the summer months when there is no snow to be found anywhere. And there are also lots of skaters who snowboard during the winter.

There are some locations where you can skate and snowboard during the same months, but generally, they have a different season – at least in areas that experience a real winter with lots of snow.

One board has wheels

But the real difference with this in mind is how you control the board. When snowboarding, you’ll rely heavily on your edges to dig into the snow and help you maneuver. Your board actually touches the ground.

A skateboard is elevated off the ground because of the wheels, and you won’t use its edges at all. Instead, you lean into turns to generate the first to turn, slide and stop. It’s a similar feel but technically a completely different method.

You strap your feet into bindings when you ride a snowboard. You simply stand on a skateboard, and your feet are freestanding. This is another significant difference between the two sports and a feel that can take some getting used to if you have only tried one sport.

Bindings keep your board from running away downhill without you and let you transfer power into the board to maintain control. Skateboards transfer power from your feet without the need for bindings.

Here are a few quick answers to some common questions relating to snowboarding and skateboarding.

Is snowboarding harder than skateboarding?

Snowboarding is a little more difficult than skateboarding, mainly because it isn’t as accessible. You don’t need snow or special equipment to skateboard – you just need a board. It’s not always this way for everyone, but most people find that snowboarding is harder.

Does snowboarding help with skateboarding?

In my experience, all of the boardsports can help benefit each other. If you have never skateboarded but have experience on a snowboard, you’ll most likely be able to pick up skating relatively quickly because it involves similar balance and coordination.

What is the difference between snowboarding and skateboarding?

Is snowboarding hard to pick up?

Most people can learn how to snowboard at a basic level pretty quickly. Everyone will have a different experience, so there is no exact answer to this question. If you take a lesson and practice, I think it’s pretty easy to pick up.

Snowboarding and skateboarding have many similarities, but they also have a few main differences. They are both fantastic sports and can provide you with endless amounts of fun. No matter what board sport you choose to do today, you will have a great time.