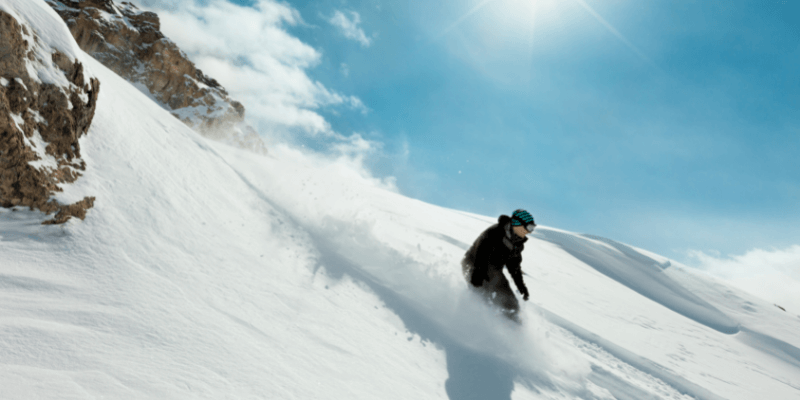 Snowboarding is an exciting sport full of big airs, high speeds, and technical maneuvers. I’m sure you’ve heard the term extreme snowboarding, and you might be wondering precisely what that means.

I’m a certified snowboarding instructor who has been riding for most of my life. I have years of experience on the mountain and have had my share of extreme moments.

In this article, I’ll do my best to explain extreme snowboarding. It doesn’t have an exact definition, but you definitely know it when you see it. Extreme can best be described as an attitude, style, and goal.

Time to get extreme.

Extreme snowboarding doesn’t have an exact definition. It’s often left up to interpretation, and I think that’s a good thing. Being extreme can mean many different things, and we’ll look at that in the section below.

Snowboarding, on a fundamental level, isn’t necessarily extreme. It’s all about how far you push yourself in the sport and the risks you are willing to take based on your ability level. The more skills you have, the more extreme you can go – but that doesn’t mean you should or will.

According to the dictionary, extreme has a few different definitions. It can mean “existing in a very high degree” or “exceeding the ordinary, usual, or expected.”

It also can be defined as “of, relating to, or being an outdoor activity or form of a sport that involves an unusually high degree of physical risk.”

I think the combination of these different definitions leads us right into what extreme snowboarding actually is.

What is Extreme Snowboarding?

If I had to define extreme snowboarding in a single sentence, it would be this: “snowboarding at a very high level that involves tremendous skill and heightened risk.” But it’s also not something that can be contained into a single definition. That’s part of the essence of being extreme.

Extreme snowboarding can mean different things for different riders. It could be tackling some of the steepest backcountry lines in the world or performing tricks in the terrain park at a professional level at its highest expression.

When you are just learning how to ride, any task outside your ability level can appear extreme. Until you figure out how to do it, and then it becomes part of your skillset.

Extreme sports have been marketed over the last few decades to include popular snow sports like skiing and snowboarding. They are both activities that involve much more risk than your average activity, so it’s easy to see how the media hyped up this term.

An extreme snowboarding event, like what you would see at the X-games, involves some of the best riders in the world. You’ll see tricks, maneuvers, and runs that are at such a high level, the vast majority of us will never even come close to attempting.

To the viewer, the superior skill set of the rider makes it seem like they are doing something extreme. To the athlete who has trained nearly their entire life to get that good, they are pushing their limits but don’t always classify everything as extreme.

I generally think that extreme snowboarding is better classified as pushing yourself beyond boundaries to become a better rider. This involves a bit of calculated risk. And sometimes, it’s not really calculated at all.

By genuinely challenging yourself, you can develop new skills that will allow you to push past what the average rider could accomplish. The dedication and focus that this requires could be classified as extreme unto itself.

Extreme is Many Things

In my opinion, extreme expands beyond what one person can do on a snowboard. It’s always a mindset and an attitude. You aren’t going to become an extreme snowboarder unless you have an extreme mindset.

You need to believe in your skills to the point that you want to achieve something that has never been done before, or at least something very few people have done.

Does being extreme involve being a little crazy? Sure. I don’t think most normal people strive to be extreme. But I also don’t believe that average is the best way to live a life. Sometimes you need to get out of your comfort zone and just go for it.

Snowboarders have a reputation for being wild and crazy, and I think this blends right into the extreme nature of the sport. If you don’t like action and adventure, you’re not going to enjoy snowboarding very much.

And if you want to take your snowboarding skills to the ultimate level, many people will label this extreme. Whether you want to call it that yourself is a personal choice.

I don’t know many snowboarders who call themselves extreme riders, but they often have extreme skills and personalities. Their mindset and commitment to the sport are what allows them to be so skilled on the mountain.

Here are a few quick answers to some common questions relating to extreme snowboarding.

Why is snowboarding considered extreme?

Snowboarding can be considered extreme for a few different reasons. If you push it to the limits, you risk your life by flying down a mountain at very high speeds. That’s pretty extreme. The fact that you are in a very cold environment also contributes to the consideration.

What are the levels of snowboarding?

The levels of snowboarding are beginner, intermediate, advanced, and expert. Some people say that extreme is a level, but I think it’s more of a style and a mindset than an actual ability level. You can be an expert rider but not be extreme.

Is snowboarding an extreme sport?

Yes, snowboarding is considered by most people to be an extreme sport. It’s a key event in the X-games, after all, isn’t it? I don’t think that every type of snowboarding is extreme, but it certainly is at its higher and more technical levels.

What is the hardest part of snowboarding?

The hardest part of snowboarding is mastering the sport. You can learn the basics in a day or two but becoming really good can take years, even decades. The better you get, the slower your progress will feel, and it just takes time to get to an advanced or expert level.

Extreme snowboarding is easy to classify but hard to define technically. It’s a beautiful sport that involves plenty of risks. When you watch someone skilled on a board perform at their highest level, it can seem extreme.

What would you call extreme snowboarding? What’s the most extreme thing you have ever done? Let us know in the comments below.