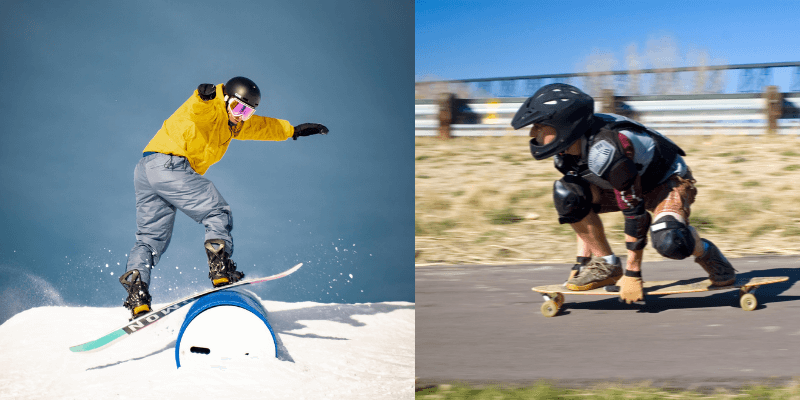 Boardsports seem like they should share some similarities, right? Whether you are snowboarding, skateboarding, or surfing, you point the nose forward and charge. But is snowboarding like longboarding? It’s worth taking a closer look.

I’m a certified snowboarding instructor who has been riding for most of my life. I’ve also spent a reasonable amount of time on a skateboard and surfboard, so I know firsthand the similarities and differences between all of these sports.

This post will show you how snowboarding is like longboarding. I’ll also highlight some of the main differences.

Get on your board, and let’s roll.

Yes, snowboarding is somewhat like longboarding. They are both board sports, and you use a similar type of balance and coordination to ride. If you are skilled at one of these activities, you’ll most likely be able to pick the other up quickly.

They do have their differences, especially if you consider longboard surfing with this question. The main difference is that snowboards utilize edges to turn while skateboards and surfboards do not.

Similarities Between Snowboarding and Longboarding

Let’s start by looking at the ways snowboarding and longboarding and similar to one another. Some of these are rather obvious, but it’s always good to take a closer look if you are considering trying one of them for the first time.

Snowboarding and longboarding require similar balance and coordination. Since they are both board sports, you’ll have the same basic stance on a snowboard as you would on a longboard. You’ll place the same foot forward and move in the same direction.

Both sports involve leaning and turning that is initiated with your legs. You’ll use the same lower body and core muscles to control both boards. You’ll also lean heelside or toeside to make the board go in the direction of your choosing.

Another one of the main similarities between the two is that they are both extremely fun. They provide you with a similar experience of freedom and excitement that is hard to replicate in other recreational activities.

You can substitute longboarding when you can’t snowboard and vice versa, making the two activities very complimentary. They involve similar amounts of stoke. If you’ve been on a board, you know what stoke means. If you haven’t, get on one quickly!

Differences Between Snowboarding and Longboarding

Snowboards Have an Edge

The most significant difference between these two boardsports is that snowboards have a metal edge that provides you with a means to control yourself on the snow. This edge creates a dynamic experience that is different than all of the other boardsports.

Skateboards don’t have an edge. You are elevated up off the ground by the trucks and wheels. You still lean either direction to initiate a turn, but your skateboard doesn’t come into contact with the ground when you do so.

Another significant difference is that snowboards have bindings and longboards do not. Bindings attach your feet to the board and keep them securely in place when you ride. They also play a big role in power transfer and control.

Skateboards don’t require the use of bindings, and your feet are freestanding on top of the board. This allows you to push the board forward as you ride and not just rely on downhill momentum, which is how snowboards operate.

Snowboarding requires quite a bit of equipment to get started. Plus, you need a mountain full of snow to ride on. Skateboarding requires very minimal equipment other than your longboard and can be done anywhere with a smooth surface to ride.

This also means that snowboarding is more expensive than longboarding. They are both great, but longboarding is a solid second option if you don’t have the money to snowboard.

Here are few quick answers to some common questions relating to snowboarding and longboarding.

Is snowboarding harder than longboarding?

Longboarding is more accessible than snowboarding, which makes it easier to get started for some people. You don’t need snow and a bunch of equipment to longboard – you just need a board and some pavement.

I think that Carver Skateboards are the most similar to snowboards. They carve and turn really well and have a surf-like feel that translates into the world of snowboarding. They aren’t the longest longboards around, but they handle like a dream.

Is skateboarding or longboarding better for snowboarding?

Longboarding will give you a closer feel to snowboarding than shortboard skating. A longer board more accurately performs like a snowboard in terms of the balance required to turn and ride. Both are great activities to do in the summer months.

Is snowboarding easier than skateboarding?

If both sports were as easily accessible, I think snowboarding might be a little easier to pick up. But because not everyone has access to snow, a mountain, and all the other gear required to get started, skateboarding is generally easier.

Snowboarding and longboarding are two amazing activities. You can’t go wrong with either of them, and I recommend trying them both. That way you can compare how they are similar and different yourself!