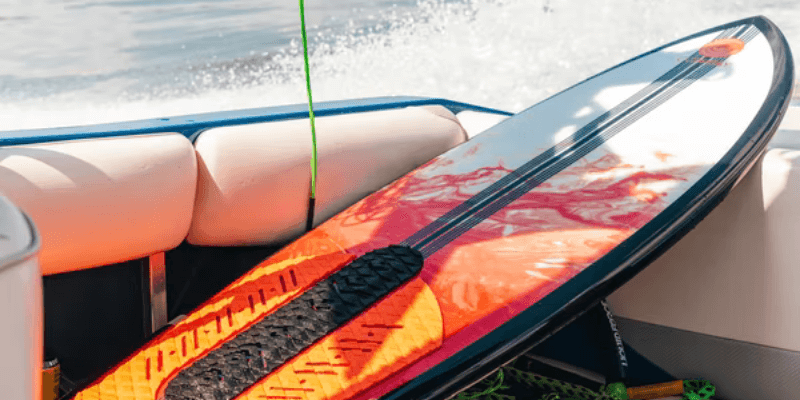 No, you can’t use a wakeboard to snowboard.

These are two different board sports, and a wakeboard is designed for use on the water. It could be possible to try and slide down the snow on a wakeboard, but you won’t be able to stay in control.

I’m a passionate snowboarder with years of experience in the snow. I see some unusual questions about the sport from time to time, and using a wakeboard on the snow is one of them.

This post will show you why you can’t use a wakeboard to snowboard. I’ll also answer some common questions about this and explain the differences between the two boards.

Wakeboard vs. Snowboard: The Similarities

Wakeboards and snowboards are similar because they are both fun board sports. If you have the skills to ride one, you can typically pick up the other very quickly. They involve similar balance and feel, and you’ll use the same stance on each.

Both of these also require a similar balance and coordination. The feel of being on a snowboard is similar to that of a wakeboard in that you’ll lean into turns and can carve through the water as you carve through the snow.

Wakeboarding and snowboarding are also similar in the fact that you use bindings on the board to keep your feet attached. This is different than skateboarding or surfing, where you simply stand on the board while it is in motion.

Wakeboard vs. Snowboard: The Differences

Even though these are both boards and require similar amounts of balance, they are actually pretty different in many other ways. That’s why you really can’t use a wakeboard to snowboard or vice versa.

A wakeboard is designed to be towed behind a boat. It has a design that offers buoyancy and floatation to help you stay on top of the water as you’re being pulled. It’s thicker than a snowboard and doesn’t have sharp edges because you don’t need to dig into the water.

A snowboard is thinner because it isn’t designed to float on water. A snowboard towed behind a boat wouldn’t really work because it’s not designed the same way as a wakeboard.

Snowboards also have sharp edges to help you stay in control when you are riding down the snow. These edges dig into the snow as you lean into turns and also help slow you down. Wakeboards don’t have these.

Using a Wakeboard on Snow

Technically, you could take a wakeboard on the snow. You could strap your feet in and point downhill. But I really wouldn’t recommend it because there is no way to keep yourself in control without edges.

A wakeboard will slide down the snow, but when you want to lean into a turn or slow down, the board will not give you any similar performance to a snowboard. You’ll probably get hurt, so it’s not even worth experimenting with.

Here are a few short answers to the most commonly asked questions relating to if you can use a wakeboard to snowboard.

What’s the difference between a wakeboard and snowboard?

A wakeboard is a board designed to be towed behind a boat. It rides on the wake and has step-in-style bindings. A snowboard is intended to be used on the snow and has different bindings. The boards also have a different shape that caters to their intended use.

Can you use a wakeboard without bindings?

Can you float on a wakeboard?

You can’t use a wakeboard to snowboard, and you can’t use a snowboard to wakeboard. Even though these two sports have some similarities, they are different enough to make it close to impossible to use them in a way they aren’t built to be used.