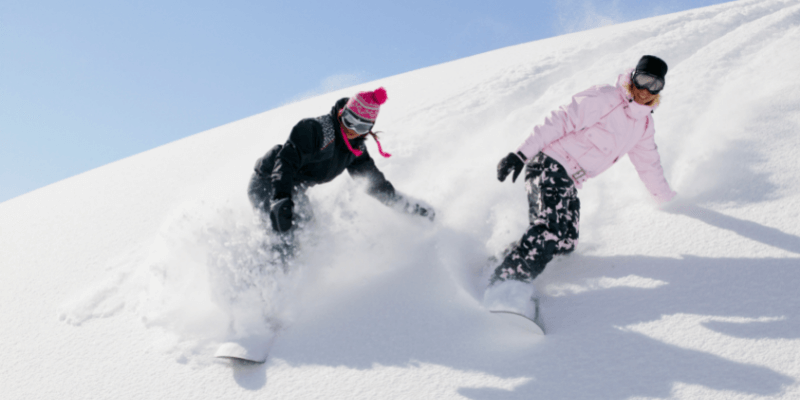 There are a few different varieties of snowboard racing, and they all are pretty exciting. Technically, you can always challenge a friend to a race down a favorite run, and that would qualify as well.

I’m a certified snowboarding instructor who is well-versed in most styles of riding. I’ve taken part in a few official races, and I also watch the significant snowboarding racing events in the Olympics and X-games.

This post will dive into everything related to snowboard racing. I’ll show you the different varieties of racing and what’s involved with each of them.

At a basic level, snowboard racing can fall into two main categories – organized and unorganized. Organized racing events consist of what most people think of when they hear the term. These will be competitions ranging from amateur to expert events.

Unorganized events are any sort of race that doesn’t have an official title. If you want to race your family or friends from the top to the bottom of the trail, you’re free to do so. You just won’t win any reward aside from bragging rights.

The Types of Snowboard Racing

For this article, I’ll show you all the types of organized snowboard racing. I’ll explain the main events you will see on TV in the Olympics, X-games, or World Cup of Snowboarding.

Some of these events have some strange rules that might seem challenging to understand. If you want to learn more about them, I’d suggest watching a race to get a better understanding. You can watch a YouTube video of these events or catch them in person if you’re lucky.

This is a popular event because it’s one of the fastest snowboard racing events. Racers can reach speeds of up to 70 km/hr, which is cruising. The parallel giant slalom involves two racecourses that are set up side by side.

Racers compete head-to-head style against one another, and they have to go in between gates set up 20-27 meters from one another. You can be disqualified if you miss a gate or crash.

Parallel Slalom is a more tightly compact version of the parallel giant slalom mentioned above. Boarders must make quicker turns through gates that are set up 8-15 meters apart. It’s a more technical race with lots of turns that doesn’t reach as high of speeds.

This is a somewhat new event at the major competitions and was first a part of the Olympics at the 2014 winter games.

This was the first Olympic snowboarding event, but it hasn’t been at other games since it debuted at the winter games in 1998, the first year snowboarding was a part of the games. Giant slalom is a larger race than slalom and is another high-speed event.

Racers must travel down a pre-established course and navigate gates set up 25-32 meters apart. It is similar in design to giant slalom skiing, which is a popular racing event.

Slalom is a somewhat simplified racing event that is timed. Racers must navigate gates that are only space 8-15 meters apart, making fast turns that require exceptional ability and quick navigation.

The winner of a slalom race is determined by the combined time for two separate runs. It’s somewhat unique in that regard, as the fastest single time does not always result in the event’s winner.

Super-G is another extremely high-speed event that is very exciting to watch. I’ve seen one of these races at a resort in Colorado, and it blew my mind how fast the racers were riding while still maintaining excellent control.

Gates in the super-G are spaced out very far apart at distances of 30-40 meters. This allows riders to build up substantial speed before making a turn, which results in the high speeds the event is known for.

Snowboard cross has been an X-games staple event for many years, and it finally became an Olympic event in 2006. This is one of my favorite racing events because there is a lot of action, and it is always fun to watch.

Snowboard cross is different than most other snowboard racing events because it involves four riders racing against each other at the same time. They have to navigate a bunch of features, turns, and obstacles.

Snowboard cross races are typically set up in various rounds where the winner of a round advances through additional rounds until there are only four riders left. There is then a final round, with this winner becoming the overall race champion.

There are a few other types of snowboard racing that I didn’t mention here. Some events are no longer practiced in the major winter games, while others never got popular enough to become significant events.

Because snowboarding is such a dynamic and evolving sport, I wouldn’t be surprised if more racing events are created in the next few years. It’s always fun to see the sport progress!

Here are some quick answers to a few common questions relating to snowboard racing.

How do you race a snowboard?

There are many different types of snowboard racing. Most of them involve going down an established course that has a predetermined length. The rider who posts the fastest time is crowned the winner. Snowboard Cross involves multiple riders at once.

What kind of sport is snowboarding?

At a basic level, snowboarding is a snowsport. It involves riding down the snow at high speeds. You could also call it an Olympic sport if you think about all the snowboarding events that are now part of the winter games.

What is the meaning of snowboarding?

Snowboarding means many things to many people. If you break down the term literally, it means riding a board down the snow. But it is obviously much more than that. It’s an expression of fun and freedom for many riders.

How fast do snowboard racers go?

Olympic snowboard racers can reach speeds of up to 70 mph and sometimes higher. These top speeds are most often achieved in the parallel giant slalom event or super-G, which are the fastest racing events around.

Snowboard racing covers a lot of ground, pun intended. There are many different events you can watch on TV or in person to get an idea of the skills needed to race at a high level. Watching any race is sure to help stoke your need for speed.

Have you ever been in a snowboard race? Was it an organized or unorganized event? Let us know in the comments below.