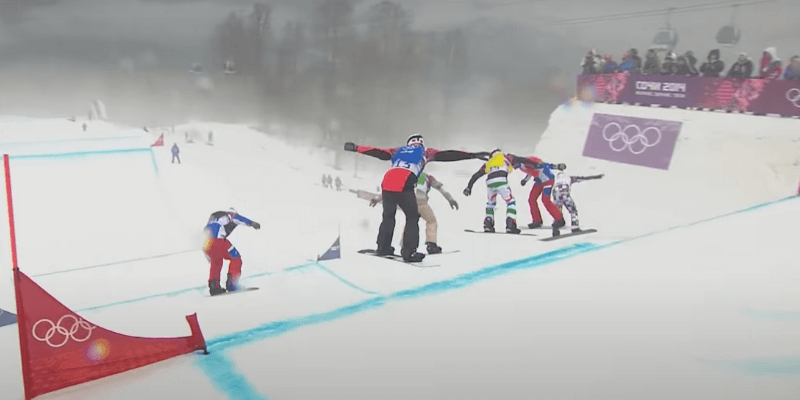 There are many variations on classic snowboarding. If you’re a casual rider, you might prefer an all-mountain style or love to play all day in the terrain park.

My name is Lorraine, and I’m a certified snowboard instructor. There’s even a chance you don’t classify yourself in a certain style at all because you’re just learning or prefer a little bit of everything.

If you’re a competitor, things can be quite different. Serious snowboard competitions require years of practice and a focus on one specific style.

There are several different major snowboarding competitions out there, and those events occur regularly all over the world.

One style that’s exciting, but not quite as popular as other events, is Snowboard Cross.

My name is Lorraine, and I’m a certified snowboard instructor. Not everyone knows the ins and outs of this style, which is why we’ll break it down in this article.

Snowboard Cross is also commonly referred to as Boardercross. It’s a head-to-head competition where four to six snowboarders race against one another down an established course.

Riders must navigate a number of turns and obstacles, including terrain features like bumps, jumps, dips, and berms. Each course is unique and comes with different features depending on the competition.

A typical Snowboard Cross course is fairly narrow and, when combined with the number of riders, serves as a test of many high-level skills like speed, turning, and maneuverability.

It’s a fun and exciting competition to watch because of its head-to-head nature. It’s quite exhilarating to participate in as well.

The origins of Snowboard Cross are loosely based around Motocross, which is a similar event where motorbike riders race against one another over a series of jumps and turns.

The obvious difference is that Snowboard Cross takes place on the snow and without the use of a motor.

The first Boardercross event is thought to have taken place in the early 1990s at Blackcomb resort in Canada.

Two extreme sports TV show producers came up with the idea and built the first course using a borrowed snowcat. It gained popularity and was eventually aired on MTV Sports.

Snowboard Cross has been a popular event in the Winter X-games for years. In fact, it’s always been a part of the competition except in 2012 when it was dropped because it wasn’t seen to be as popular as other events.

Fans missed it and it was brought back for the next X-games in 2014. Snowboard Cross became an Olympic event in 2006, you can watch the gold medal ceremony.

What are the Rules of Snowboard Cross?

As mentioned above, the winner of a Snowboard Cross competition is the rider who completes the course in the fastest time.

Major events usually consist of several rounds where the fastest riders from each round continue onto further rounds while those with slower times get eliminated from the competition.

There are no points given like in other snowboarding events, but there are still judges who watch to enforce the rules.

One of the main rules that judges enforce is no intentional contact between the riders.

While some contact naturally occurs during the competition (and this is often an exciting element), any intentional pushing, pulling, or slowing down other riders results in disqualification.

Riders are also not allowed to directly slow down another rider from passing them. That can also result in disqualification.

That is known as interference and riders who think that they have been interfered with can request the judges to review video footage and have them decide if it did occur.

In the Winter Olympics and the Winter X-games there are both men’s and women’s Snowboard Cross events.

Some local competitions will have a unisex pool of riders, but they are normally kept separate.

In the most recent Winter Olympics, there were also a few different rules between the men’s and women’s events.

Such differences occur in the first round, and the women’s event has fewer competitors advancing to the elimination rounds.

What Equipment does Snowboard Cross Require?

In theory, all you need for a Snowboard Cross event is a snowboard, boots, and bindings. However, as the sport is a high-speed event, riders almost always wear a helmet and other protective gear.

Some wear body padding like rib guards and hip protection, but a lot of competitors also wear mouth guards as well.

A narrow course at high speeds alongside other riders can lead to some nasty crashes, which is why extra protection is so important.

A stiff board is better for Snowboard Cross as well because the extra flex makes it faster.

Professional Snowboard Cross riders use a much stiffer board during the competitions than they would during normal runs. A soft board simply won’t provide enough speed and control to let them perform well.

Read More: What is Snowboard Racing

Snowboard Cross is an exciting event that’s fun to watch and even more fun to participate in.

While most riders will never get to attempt the event at the highest levels, it’s easy to set up a simple course at your local mountain and compete against your friends.

Just make sure you wear a helmet and don’t race on a crowded slope with other skiers or riders.

If you want to check out more footage of some great Snowboard Cross competitions, check out these videos of the Men’s and Women’s events from past Olympics. It will give you a good idea of the skill and speed these riders have.

There are some amazing athletes who compete in the event and you might learn a thing or two from watching.