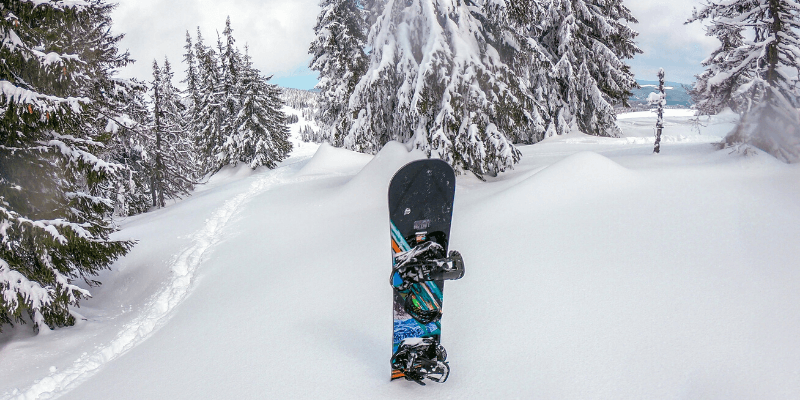 California is a land of plenty.

With nearly a thousand miles of coastline, the state covers the majority of the western side of the United States. It is well known for its sunny beaches, quality surf, and other summer-related activities.

However, there are plenty of options to play in the snow as well.

The Golden State has 35 different ski and snowboard resorts.

My name is Lorraine, and I’m a certified snowboard instructor. I’ve been to a lot of places snowboarding. In this guide, You’ll look at the best ones and explain why so many riders all over the world seek them out for some winter fun.

One of the top destinations for snowboarders in California is Mammoth.

This well-known resort is a 5-hour drive away from both Los Angeles and San Francisco, which makes it a huge weekend destination during the colder months of the year.

It’s one of the largest resorts in the state with over 3,500 rideable acres, and it gets pretty consistent snow every season. The resort boasts an average snowfall of around 400 inches.

A big allure of Mammoth is its terrain parks. The resort has seven different parks to choose from and they cover over almost 1,000 acres.

The skate and surf culture that’s so legendary in California can also be seen here, as Mammoth delivers some of the best features in the world.

With two halfpipes, 40 different jumps, and over 30 transition features, the parks here are truly world-class.

The area around Mammoth sees over 300 days of sunshine a year as well. That means there’s a decent chance of enjoying a bluebird powder day if you get lucky.

There are also a ton of good restaurants and accommodations in and around the resort to keep you occupied when the lifts close for the day.

Great snow, excellent terrain, and a storied board culture make this location one of the best in the state.

The crystal clear Lake Tahoe, which sits In the northern part of California, is a tourist destination in and of itself.

However, many people head to the region to enjoy the 12 different ski and snowboard resorts found there.

That sheer number of options in the area makes it a top international destination for snowboarders, and it attracts a large number of visitors year-round.

Excellent riding can be had here in the winter months and it offers something for every boarder.

Kirkwood is one of my personal favorite resorts in the area.

The mountain has some fun terrain, including a vertical drop of over 2,000 feet and more than 2,300 rideable acres.

This area can be accessed by 15 lifts, giving you the chance to ride some of the best terrains in the entire state.

It’s not a great mountain for beginners, but if you want a challenge and the chance to avoid some of the crowds, Kirkwood is an awesome option.

Heavenly Mountain Resort is another top Tahoe snowboarding location, and it serves as a great place for all types of boarders.

With almost 5,000 rideable acres, this is the biggest resort in the Lake Tahoe area. The chutes here are extremely fun and can be challenging even for experienced riders.

Give them a chance if you want to push your limits. With two terrain parks and 3,500 vertical feet, Heavenly has a lot to offer.

Another great spot to snowboard in California that’s also near Lake Tahoe is Squaw Valley.

This location sees some great snow and, due to its geography, often stays open well into the spring.

That means the resort has one of the longest seasons in the state, making it a great place to visit many different months of the year.

Squaw Valley averages 450 inches of snow each season and has 3,600 rideable acres filled with runs that cater to all ability levels.

Big Bear and Snow Summit are two smaller resorts located in the southern part of California.

The proximity to Los Angeles makes these destinations very popular in the winter. In just two hours (traffic permitting) of the city, you can take turns on the snow.

These two sister resorts are located right next to each other and a shuttle service will get you from one location to the other with ease.

With a combined 1,000 rideable acres between the two, there’s something that every boarder at every ability level can enjoy.

The terrain parks are world-class, each being perfect for learning new tricks or dialing in high-flying maneuvers.

These resorts don’t see a huge amount of snow, with an average of only 100 inches a year, but their closeness to LA makes them one of the only locations in the world where you can snowboard and surf on the same day.

Another iconic snowboarding location in California is Mt Shasta.

If you’ve ever driven north of San Francisco, there is no doubt you’ve noticed the stoic presence of this 14,000-foot volcano on your travels. It’s a beautiful, scenic sight that anyone can enjoy.

However, it also sees a fair amount of snow in the winter and is home to a small resort.

The resort itself is pretty small at only around 500 acres. Three lifts give you access to the terrain here and even though your options are limited, it’s a great place to snowboard due to its beauty.

There are also far fewer crowds than at other resorts in the state. Mt. Shasta also has two terrain parks and some decent food in the lodge, making it a great day trip or family destination.

Snowboarding is great no matter where you find yourself pursuing the sport.

California is a top snowboarding destination because of the many different locations it has for residents and visitors alike.

From world-class resorts to smaller destinations that are close to major city centers, California certainly lives up to its reputation for fun in the sun even when it involves snow.