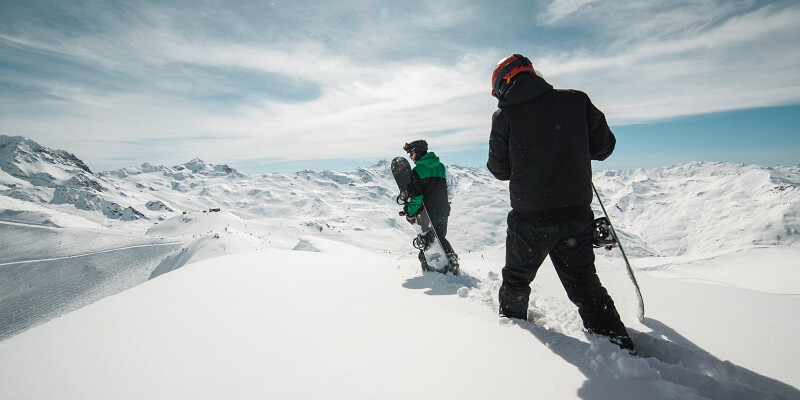 The U.S. is an amazing place to snowboard. There are resorts scattered all over the country, and many of them have a world-renowned reputation.

It does not matter if you live for the backcountry, spend all season in the terrain park, or simply want to get out and explore a new region, the country has something for everyone.

My name is Lorraine, and I’m a certified snowboard instructor. I’ve been to a lot of places snowboarding. Below is a look at the best places to snowboard in the U.S.

I would never say there is a bad place to go riding, but I’ve spent time exploring all over the country and these areas have the most to offer.

Colorado is my personal favorite place to snowboard in the United States.

Sure, I might be a little biased because I grew up learning how to ride and ski there, but I’ve talked to people from all over the world and they have said the same thing.

There are 26 different resorts scattered across the state and some of them are considered top international destinations.

is a favorite local resort that also draws people from around the world. The area has plenty of terrain parks, awesome steep and hike-to terrain, as well as plenty of groomed runs to match the abilities of all boarders.

Beyond that, there is Aspen. The region offers four different mountains to ride on as well as a legendary nightlife. The Winter X-games are hosted there as well.

Vail is another resort in Colorado that has some of the best in-bound riding options in the state. It has over 5,000 rideable acres, several terrain parks, and plenty of great food.

If you’re looking for a smaller resort that still offers plenty of great riding without as much of a crowd, take a look at Loveland and Winter Park.

Colorado is known for getting large amounts of champagne powder every year, and with over 300 days of sunshine, there are plenty of opportunities for riders to seek out the elusive and ever-enticing bluebird powder day.

The region has gotten more crowded in recent years, but that’s for a good reason: the snowboarding always delivers.

There are also plenty of backcountry snowboarding options in Colorado, which is another reason it tops the list for the best places to snowboard in the U.S.

The southwestern region is home to some of the best riding you’ll find outside of resort boundaries.

Silverton Mountain offers some guided backcountry and heli-skiing opportunities that are not to be missed if you live for adventure and the allure of fresh, untouched lines.

Utah is another amazing snowboarding destination and one of the top spots in the US to pursue the sport.

This state is a western neighbor to Colorado and it makes it onto this list due to several amazing resorts scattered near the international airport in Salt Lake City.

It also has epic amounts of annual snow that some claim to be the best in the country. If you love great conditions and want to avoid larger crowds, Utah has a lot to offer.

Park City Mountain is one of the most visited resorts in the region. It has a lot of terrains to explore as well as excellent nightlife. With over 7,300 rideable acres, Park City is immense.

You could spend an entire season here and still discover new runs just about every single day. The sheer size means you can avoid crowds and get fresh tracks all day long.

Snowbird is another great place to board in Utah. This resort is known for getting absolutely dumped on with snow and if you love steep-and-deep terrain, it’s worth a visit. Snowbird doesn’t have the amenities of other big resorts, but what it lacks in dining and accommodation it more than makes up for in snow quality.

There are few crowds and plenty of terrain to explore.

Utah is somewhat unknown in comparison to other areas of the U.S., but that’s a big part of why it makes this list.

Even though the resorts mentioned here are within an hour’s drive of a major city, they still don’t get as crowded as the resorts seen in Colorado and California.

If you’ve never been to Utah in the winter, consider it for your next snowboard trip.

California is better known for sunshine, surf, and sand than snow.

However, that doesn’t mean the state doesn’t have a lot to offer for snowboarders. It’s one of the only locations in the country where it’s technically possible to surf and snowboard on the same day.

I’ve tried to pull this feat off several times and have yet to complete it because of traffic, however. There are actually 35 different resorts scattered throughout the state’s mountain ranges.

Mammoth Mountain is one of the most popular places to snowboard in California and its proximity to both San Francisco and Los Angeles makes it a sought after destination for many people in the state.

Mammoth has a lot to offer thanks to its diverse terrain and world-class terrain parks. If you like to explore or try new tricks, this is the place for you.

There’s a lot to do year-round, which is why the area is always full of visitors on and off the snow season.

Mt. Rose is another recommended resort in California. It’s not quite as well known as some of the other larger resorts but it gets great snow due to a higher elevation and often has less of a crowd than other resorts in the Lake Tahoe area.

Kirkwood is also a great snowboarding destination perched in the Sierra Nevada mountains. It gets a solid amount of snow and has a diverse amount of terrain.

California is a huge state, and there are a lot of areas to explore away from the coastline.

While you won’t get as consistent snow conditions as you’d find in Colorado and Utah, California is still one of the best places to snowboard in the US.

The United States is a diverse country filled with many different mountain ranges. As such, any of the regions listed above will give you great boarding days and awesome terrain.

Simply pick the one that sounds the most interesting and choose it as your next destination.