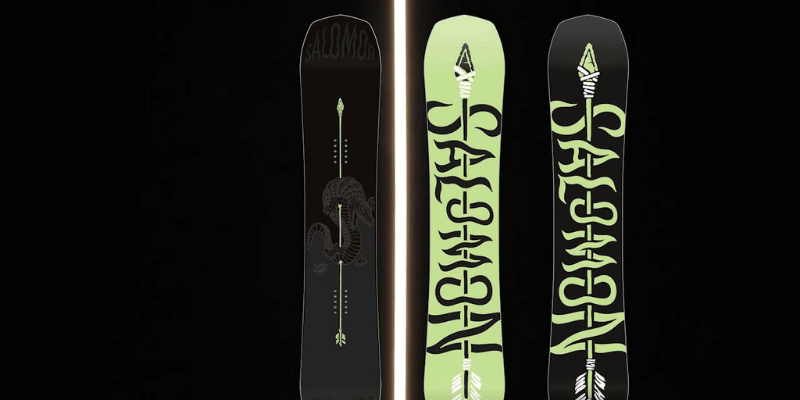 Salomon is a pretty great snowboard brand and is probably one of the top brands that make both snowboards and skis. Salomon offers some great boards, especially for experienced riders and women.

I’ve been snowboarding for most of my life, and I get out in the snow as often as possible. I’ve used many different boards over the years, and I know what makes a good brand. I have used several Salomon boards and also some of the brand’s apparel.

This post will take a look at Salomon snowboards. I’ll explain why I think this is a good snowboard brand and also provide you with some other information you might find helpful.

Time to get started.

Why Salomon is a Good Snowboard Brand

A handful of wintersports companies out there started out making skis and then started making snowboards. Many of these companies have been around for a long time and began making snowboards in the late 1980s when the sport really started to catch on.

Rossignol, K2, and Salomon are all such companies. They still might be better known for the skis they make, but they all have a large number of snowboards now as well.

I think that Salomon is the best brand out of these in terms of their snowboards. Salomon makes some great options, especially for experienced riders and women. I’ve had many good days on Salomon boards and would definitely recommend them.

Their boards are all pretty aggressive and are a lot of fun to ride if you can handle them. I like that they can go fast without losing performance traits while also providing lasting durability you can count on.

Another reason Salomon is good as a brand is that they offer excellent customer service. And they’ve been around for so long that they have a reputation you can count on. If you ever have any issues with your gear, you won’t need to worry.

Salomon also offers a wide range of apparel and other gear. So if you want to explore other options than just their snowboards, you can easily make that happen.

Should You Get a Salomon Snowboard?

Salomon snowboards can be good for a variety of different riders, but I don’t think they are that good of an option for beginners. If you are just starting on the snow, look for an option that isn’t as aggressive or fast.

But if you are an experienced rider who really likes to rip, Salomon has some great models to look into. And I like all of their women’s boards as well. They can handle technical terrain, and their all-mountain options are very versatile.

Salomon boards are also relatively affordable most of the time. So they can be a somewhat budget option if you want a high-quality board at a more affordable price.

Here are a few short answers to some of the most frequently asked questions relating to Salomon snowboards.

Is Salomon a good board?

Salomon is not only a solid brand all-around, but it also makes some great snowboards. This is especially true for more experienced riders. Salomon has some women’s snowboards that are also awesome and a lot of fun to ride.

What is the best brand for snowboard?

It’s nearly impossible to pick the best brand for snowboards. There are many good options out there, and the best board is the one that works well for your needs and preferences. But some top options include Capita, Burton, Salomon, and Ride.

Yes, Salomon makes a bunch of different snowboards for all types of riders and conditions. The brand started as a ski company and still makes a lot of well-known skis. But it also has an extensive lineup of snowboards.

Is Salomon assassin good for powder?

The Salomon Assassin is a good all-mountain snowboard that will give you decent capabilities all over the mountain. That means it is pretty good in powder. But it’s not exclusively a powder board and won’t perform as well in the deep stuff as those will.

Salomon is a solid snowboard brand that makes great models for more advanced riders and women. They have a long-standing reputation and offer excellent customer service alongside offering plenty of cool apparel.