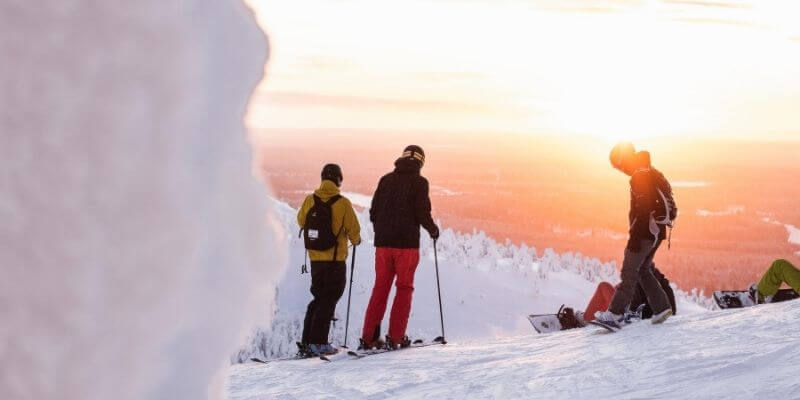 The age-old debate between snow sports enthusiasts rages on to this day. Which is the better way to go down a mountain, snowboarding or skiing?

Whenever this question is asked, you’ll likely hear a lot of different answers. So, who is right? Is snowboarding better than skiing? Or is it the other way around?

My name is Lorraine, and I’m a certified instructor. I’ve spent over three decades on the snow with various pieces of equipment strapped to my feet. I learned to ski long before I learned to ride, but I have had more memorable days snowboarding as of late.

I love them both, but for the sake of today’s article, I’m going to tout the benefits of snowboarding over skiing. Let’s dive in and get the argument started.

Reason 1: Snowboarding is Easier to Learn

One big reason snowboarding can be considered better than skiing is that it’s easier to learn. If you’re just starting to get into winter sports, I would recommend snowboarding over skiing.

There are fewer maneuvers to worry about when learning the basics of snowboarding and this makes it easier for first-timers to pick up quickly.

There’s just something more natural to boarding that makes it easier to learn.

Everyone learns new skills at a different pace, but I’ve seen friends progress at snowboarding much faster than they have at skiing. Once you have a good feel for the basics of turning and carving, the advanced techniques are easy to grasp.

With skiing, it can take far longer to work through these basics and get beyond the beginner stage. If you want to get to an advanced level, snowboarding is better because it’s easier to learn.

Ok, so this reason is a bit subjective. However, it does hold some weight with enthusiasts. Snowboarding is simply cooler than skiing.

The act of snowboarding itself has a different flow and feel to it than skiing, which makes it a more creative and visually appealing snowsport.

Since snowboarding can attribute much of its style to other boardsports like skateboarding, it inherently comes with an appeal that skiing can’t match.

Skiing sometimes has a more stiff and formulaic appeal.

You see a lot of older folks on skis than you do on snowboards. Maybe it’s because skiing has been around longer, but one look at a run at your local resort and you’ll see the people out riding look cooler than skiers.

This is arbitrary, I know, but if you want to be hip and feel good about the experience, snowboarding wins.

Snowboarding apparel also adds an element of cool to the sport. Snowboard brands tend to be quite innovative and come with a mass appeal that has made them popular beyond the on-snow world.

From jackets and pants, snowboarding equipment is simply better.

Another reason that snowboarding is better than skiing is that you don’t have to deal with as much equipment.

With skiing, you have two skis on your feet and two poles in your hands. With boarding, all you have is a snowboard. That makes for less equipment to carry, worry about, and deal with while you move around the mountain.

It’s easier to get started as well.

Snowboarding boots are way more comfortable than ski boots. If you’ve ever broken-in brand new ski boots, you know that it can be a painful and uncomfortable experience that lasts for days. That is due to their tight, stiff construction.

Snowboard boots might take a little time to break in as well, but overall they are much more comfortable to be while you ride.

Less gear also means that you save a little money.

Both skiing and snowboarding can be expensive, but snowboarding is a bit cheaper because you don’t have to buy as much equipment.

Snowboard boots tend to be cheaper than ski boots as well. Money isn’t the best reason to pick one of these sports over the other, but it is something to think about.

Reason 4: You Won’t Lose Your Snowboard When You Fall

If you’ve ever seen a skier take a gnarly fall and watched their skis, poles, hat and goggles go sailing all over the slopes, you’ve witnessed what’s known as a yard sale.

Skis are designed to come off of your feet when you fall, and if you don’t have your poles strapped to your hands, they’re going to come off too. This can result in you being in one spot on the mountain and the rest of your gear scattered every which way.

When you fall on a snowboard, even if it’s a bad wipeout, that won’t happen. Your board will stay attached to your feet and you don’t have any poles to worry about.

Your chances of falling aren’t any less on a board, but you won’t have to deal with your board flying down the mountain after you get a face full of fresh snow.

Does it Even Matter?

At the end of the day, it doesn’t matter how you like to get down the mountain. We are all taking advantage of an amazing experience that should be shared by anyone who’s willing to put in the time.

If you spend too much time thinking about which is better, you will take away from time spent practicing your skills or planning for future trips.

As long as you’re out there having a good time and enjoying everything that winter has to offer, there really is no need to judge others based on which snowsport they prefer.